Would you drink snake wine?

With these bottles of unusual wine produced in Thailand, a tasty tipple comes with a potent bite. The venomous cobra snake is used to make the snake wine but the poison is cancelled out by the alcoholic content of the drink, meaning you’ll avoid a pounding hangover.

Similarly, months of fermenting means the dead scorpion encased in the yellow bottles doesn’t have the same sting in the tail as when it was alive.

Instead, the liquor is considered healthy and seemingly has many health benefits. These rice-based liquors are considered to be a strong natural aphrodisiac. 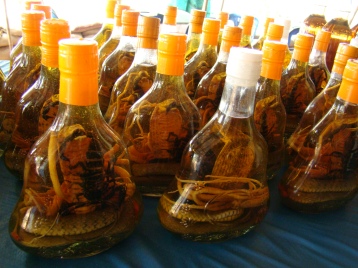 There are scorpions in with the snakes!

Are you brave enough to drink snake wine?