March the weather in London is quite chilly and miserable so its the perfect time to explore the buildings found all over the city.  My friend Adel who actually lives in London now took me out to Greenwich for the morning. Greenwich is a district of South East London, England, and  is quite famous for being the spot where you can stand on the Greenwich Meridian (0° longitude) and Greenwich Mean Time.

Personally I think this is something I will come back and do in the summer when there is not an icy wind blowing about. Dressed warmly and wrapped up in our scarves we braved the cold and wet London had to offer that Saturday morning.

As you can see, we were dressed warm as it was quite chilly outside

Greenwich became the site of a royal palace, the Palace of Placentia from the 15th century, and was the birthplace of many in the House of Tudor, including Henry VIII and Elizabeth I. The palace fell into disrepair during the English Civil War and was rebuilt as the Royal Naval Hospital for Sailors by Sir Christopher Wren and his assistant Nicholas Hawksmoor. These buildings became the Royal Naval College in 1873, and they remained an establishment for military education until 1998. Luckily the historic rooms within these buildings are open to the public.

As we entered the grounds we were greeted by the the Discover Greenwich Visitor Centre which provided an introduction to the history and attractions offered by the Greenwich World Heritage Site.

Our note states that we are freezing here at Greenwich!

The Centre explains the history of Greenwich as a royal residence and a maritime centre and is definitely worth a visit before entering the main building. Inside this centre you can leave notes about your experiences here at Greenwich. Our note states that we were definitely freezing out in this weather.

As we walked from the river through the Greenwich site you cant help but be awestruck by the immensity of the pillar filled buildings. The Old Royal Naval College is the architectural centrepiece of Maritime Greenwich and within the complex is the former college dining room, the Painted Hall in King William Court which was painted by James Thornhill.

Walking through the long hall of King William Court

King William Court is famous for its baroque Painted Hall, which was painted by Sir James Thornhill in honour of King William III and Queen Mary II .

Walking up the stairs and through the door of the Painted Hall my breath was taken away by this magnificently painted ceiling.

Since 1998 the site has had new life breathed into it through a mix of new uses and activities and a revival of the historic old site.

This fabulous Hall has been used in a couple of films!

Such a beautiful and grand Hall

Public concerts are regularly held here as well as a wide variety of business and cultural events. Its easy to see why the  site is regularly used for filming television programmes and even feature films. Productions have included Patriot Games, where an attack on a fictional royal family member, Lord Holmes, was filmed. Other films include Four Weddings and a Funeral, The Madness of King George,The Mummy Returns, The Avengers (1998) and Lara Croft: Tomb Raider (2001). I am definitely going to watch these films again and be on the constant lookout for this beautiful hall.

The magnificent painted ceiling of the Hall

You can definitely end up with a sore neck after a visit to this hall. Luckily they have mirrors placed on trolleys so you can have a look at the ceiling without straining your neck.

Playing around with the mirrors! 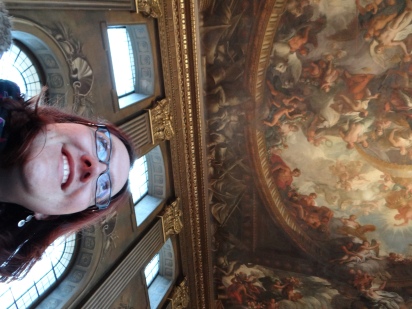 The last building we explored was the Queen Mary Court which houses the Chapel of St Peter and St Paul (designed by Wren but not completed until 1742). Its present appearance dates from 1779–89, having been rebuilt to a design by James Stuart after a devastating fire.

The Chapel is dedicated to St Peter and St Paul

The Chapel in Queen Mary Court

The Chapel is dedicated to St Peter and St Paul, both of whom have connections with water and the sea. The chapel is full of naval symbols, intended to remind the residents of the Royal Hospital for Seamen, who had to worship there daily. The Chapel is not heated so we left after a while in search of a cup of hot coffee.

20 Responses to The magnificent Painted Hall of Greenwich, London